Protecting Your Pet (And Your Family) From Ticks 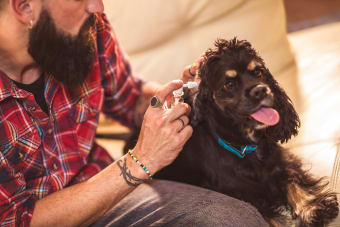 Ticks are dangerous to people and pets, as they can spread a number of serious diseases. Here, our Baltimore vets discuss how these external parasites thrive, symptoms to watch for, and how to prevent ticks from infecting your household.

These external parasites feed on the blood of animals and humans. Since ticks do not fly or jump, they rely on hosts (typically, wild animals bring ticks onto your property) to get from one host to another. Once they are on your property, pets can become hosts and bring the parasites into your home.

Ticks are capable of spreading a number of serious diseases and therefore are dangerous to both pets and people. Humans can contract serious conditions such as Lyme disease when the tick's saliva — which contains bacteria and germs — enters our bloodstream.

One of the most common tick species found in areas where white-tailed deer live in Maryland is the black-legged tick (also referred to as the deer tick). Watch for them in deciduous forests. The black-legged tick is known for being the primary transmitter of Lyme disease, in addition to babesiosis and other conditions.

Adult black-legged ticks are active year-round, with nymphs and larvae being found usually from May to August and July to September.

Adult Lone Star ticks are active from April to late August and are most often found in woodlands with dense undergrowth. This tick species is associated with an allergy to red meat, along with Southern tick-associated tularemia, human ehrlichiosis and rash illness.

Brown dog ticks love to feed on dogs but may also make their way into homes. Whether they are in their larvae, nymph or adult stages, dog ticks are active year-round and are capable of transmitting canine ehrlichiosis, canine babesiosis and Rocky Mountain Spotted Fever.

The American dog tick is another common resident of the state, and can cause tularemia, tick paralysis and Rocky Mountain Spotted Fever. Adults are usually found in areas with little to no trees, and are most active from April to early August.

Though Gulf Coast ticks are not often found in Maryland, they have been known to frequent grassy prairie areas and coastal uplands in recent years. This tick species can carry Rickettsia parkeri spotted fever.

How do I check my pet for ticks?

Check your dog carefully for ticks, even after a short walk through grass and bush. Keep in mind that your pet's fur should be checked deeply, as should the neck area, between the toes and legs, and inside the ears.

How do I get rid of or prevent ticks?

Several different methods can be used to rid your small pet or dog of ticks, and prevent future infestations. Your options include oral medications, tick collars, spot treatments, or shampoo with medicated ingredients to bathe your pet and kill ticks on contact. Ask your veterinarian which parasite prevention treatments are right for you and your pet.

Keeping your lawn well-trimmed will go a long way to deter ticks from entering your yard, as they'll have fewer places to live and breed, reducing the risk of ticks residing near you. During the peak of tick season, we also recommend limiting the amount of time your pet spends outside.

Do you think your pet may have ticks? Our vets have experience in diagnosing and treating many common conditions and illnesses. Book an appointment at Falls Road Animal Hospital today.